The Veggie Boat ... and two new reports by Nicky 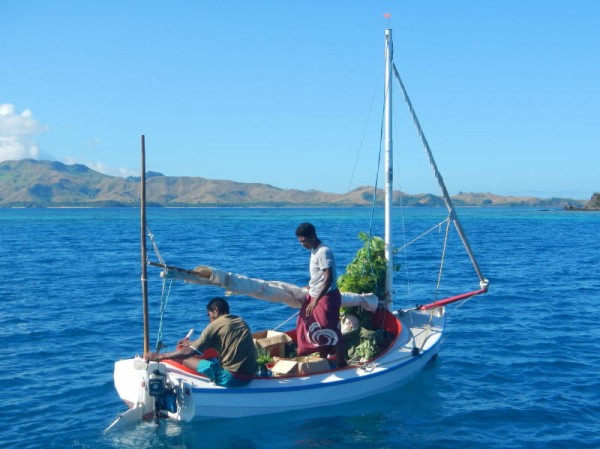 When we were in Panama's San Blas Islands, almost two years ago, everyone was eagerly awaiting the "veggie boat" as fresh supplies were running low. It never showed while we were there...

...but today it came - 20 months later in Fiji's Yasawa Islands! A local family does some small scale fruit and vegetable farming on one of the islands in the lagoon and they stopped by this afternoon, offering papayas, cabbage and other goodies. We love Fiji!

On a separate note: Nicky has completed two new school reports: One about our visit to Taveuni Island in the NE corner of Fiji at the end of June. You can find it here. The other is about how we generate and use electrical power on Namani. That on can be found here.

Nicky did a cool experiment with the Taveuni report: In his final version he highlighted only the most descriptive words and deleted everything else. What was left over - with some minimal editing - was this poem about Taveuni:

Nicky - just in time for our

Nicky - just in time for our MoFi post about energy management! We are publishing the post this Friday. http://themonkeysfist.blogspot.com/p/energy-management.html