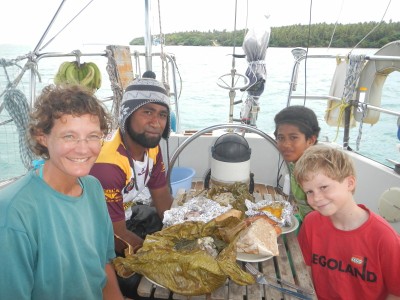 When we came to Oua last Thursday (25OCT) it was primarily because the reef and the island here promised good protection against wind and waves from a front that was (correctly) forecast to pass through on Friday. Now it's Sunday and we've had a few very nice and interesting days here. Sometime on Friday, when a tropical downpour reduced visibility to near-zero and we were busy collecting rain water to top off our fresh water supply, Freddy, a young local fisherman, swam up to Namani and paid a visit (we're anchored more than a 1/4 mile off the island, so that's a decent swim). With a few words of English and some sign-language and goodwill we were able to communicate and Freddy promised he would be back the next day with some bananas and mangos. We gave him some fish hooks and were curious how things would develop.

Freddy was indeed back the next day (this time in a little outrigger canoe) and brought us the promised bananas and mangos. We invited him to stay for lunch and had a nice meal together. We learned that there are about 70 people living on the island (with 4 churches between them - an about average ratio for Tonga) and that they spearfish at night between two sections of the reef (we still haven't figured out how they keep track of the sharks at night but have only seen a small black-tip ourselves around here). We agreed that we would visit the church on Sunday and Freddy said his family would prepare some Tongan food for us which he would bring to Namani after church for a lunch on the boat.

We did visit the church this morning (we ended up not in Freddy's but a different one, but the singing is spectacular in all of them) and had just made it back to Namani when we saw Freddy approaching in a fishing skiff, delivering a pile of different dishes his family had cooked in an earth oven that morning. He also had brought Anis, his 11-year old son, along, and we had a true Tongan feast together on Namani - take-out Tongan style, with fish, octopus, lobster, taro and other dishes, all deliciously cooked in coconut milk...

Nicky played with Anis, both of them exploring each other's boats and we were looking at charts with Freddy, learning which island he was from, showing where we planned to go and by and by establishing something like a common language. Freddy and Anis left eventually and we went for a snorkel at the outer reef, but Freddy was back at 5pm (as previously agreed) and stayed for dinner and some guitar playing (Tongan tuning: G-C-D-G-B-D) and singing (it seems every Tongang is born with a beautiful voice). Eventually we had to say good-bye as he had to go back to his family and we are planning to leave tomorrow morning. We truly do hope though, that some day, somehow we will meet again. We can certainly agree with James Cook now, when he called Tonga the "friendly islands".

What an incredible, authentic

What an incredible, authentic experience! It must feel like you are explorers in a way! Lots of Love, Laura and Aiden