Posted by Namani on Saturday, 8 September 2007 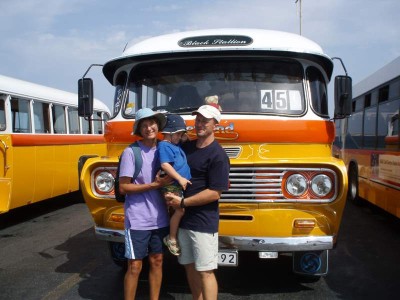 Well, we had originally planned on 6 days in Malta and it will end up being a little more than two weeks! But we have really enjoyed our time here and gotten important work done. The big project was getting the mast taken down at Kalkara Boat Yard, an excellent family business run by four brothers, their sister, and a hoard of nephews and nieces (meanwhile their father was off enjoying his retirement on his own boat in Sicily for a few weeks). They lifted the mast off on a Monday and set to work riveting a storm sail track on the mast (for the very rough conditions we hope never to see) as well as steps so that we can more easily climb the mast (so far it has been winching up). After overtime on Monday and a push on Tuesday morning, they re-stepped the mast on Namani that afternoon and we are once again a sailboat - and a better equipped one, too.

It was a great experience being tied up to the quay in front of the boat yard in Kalkara, a small and historic neighborhood. In the evening many people come out to enjoy the cooler temperatures, fishing or just gathering by the water with friends and family. We got to know one group to the point that they were bringing Nicky gifts and telling us about the area. We had our favorite bakery and playground in Kalkara, and even Tony the ice cream truck driver got to recognize us. At the same time, Valletta was a short bus ride away so we could go to town easily. It is so interesting to be in a place where Christian people speak an Arabic language, and everyone speaks English so that we can not only find our way around easily, we can also make friends and chat without sign language. It has been a real treat to spend this amount of time in Malta.

My mother was here in Malta for most of our stay and we saw a lot of the island as well as making it up to Gozo, the island just north of Malta. We opted to take a bus and then a ferry to reach Gozo as the winds and seas were very rough - which we could feel even in the well protected harbor back on Namani. We had one very uncomfortable night on our mooring but were secure there and our kind hosts at the boatyard even checked in on us in the night with the offer to come sleep at their home if it was too rough! We did, however, hold out on Namani!

The forecast calls for weak but favorable east winds as of Sunday so that is our intended departure day when we will sadly cast off from friendly Malta but look forward to Tunisia. That departure day will allow us to cheer for the Kalkara rowing teams in a big regatta taking place in Grand Harbour on Saturday. It is also a big festival weekend so there will be even more fireworks (we have seen several displays so far) and cannon fire celebrations. After that, we will surely enjoy the relative peace of two days at sea en route to Tunisia!

Hooray! I am so excited to

Hooray! I am so excited to see your pictures and read your update from Malta. It sounds like such a friendly, inviting and interesting place. I think I will have to add it to my lifetime travel list! Have a safe, peaceful sail to Tunisia :)