One of the negative side effects of cruising multiple seasons in the tropical Pacific is that one becomes quite spoiled. A new landfall that would normally be spectacular runs the danger of becoming something quite close to routine.

This morning was different however. When we entered the pass into the lagoon of Fulaga Island we were glad to discover that our jaws can indeed still drop at seeing something that looks equally breathtakingly beautiful and exotic. It's difficult to describe - "a giant turquoise lagoon that is speckled with hundreds of little tree studded mushroom-islands" is factually correct but doesn't quite do it justice and it doesn't capture the magic. Perhaps a picture will help in a few weeks' time when we have internet access again.

We had arrived at the pass at 0830 local time this morning (Sat, 29JUN) but then stood off for another hour to have the sun reliably above the few cumulus clouds in an otherwise clear sky. Despite a bit of current the pass was easy to navigate and we meandered our way to an anchorage just inside the reef on the island's east side. "Anchorage" is a bit of a misnomer as there are literally hundreds of places where you could anchor all over the lagoon without any clear delineation between them. We were surprised to find quite a few boats already in here - the secret is definitely out and with the Lau Group now being open to cruisers without special permission even the relatively remote Fulaga now has a steady sailing population of 10-20 boats during the season.

Shortly after arrival we dinghied over to the main village for our first Sevusevu, together with the crew from Zulu who had arrived yesterday afternoon already. Sevusevu is the traditional kava ceremony during which visitors present themselves to the village chief with a token gift of yaqona (another name for the kava root). Quoting from another sailing vessel's blog which has a good description of the background and meaning of this custom (see http://cic.oceancruisingclub.org/cruising_areas/264-fiji for more details):

"Once you start cruising in the South Pacific you have to put aside all previous ideas you may have had about who owns what. All land belongs to someone - and it's not 'the public'. There is some government-owned land, but the seafront and the bits you'd like to explore will usually belong to the nearest village and within the village individual families will own certain areas, called 'gardens', where they grow their crops. To anchor, swim, walk ashore etc without asking permission is the equivalent of a total stranger pitching his tent or caravan on your front lawn back home! You wouldn't much like it, and even if he asked you'd probably still say no.

Luckily for yachties there is a way round this in Fiji, which involves visiting the village Chief and presenting him with a gift of kava roots in a wee ceremony where he will grant you permission to remain on his property, walk through his village, swim in his sea etc. You are now accepted as a member of the village - which brings certain obligations to behave accordingly. 'Modest' dress is a must, no hats or sunglasses should be worn and backpacks should be carried anywhere but on the back. The villagers probably won't show open disapproval if their social codes are broken, but it pays to respect their ways. A formal farewell - plus a thank you, of course - on leaving relieves the village of any further responsibility for you." (end quote)

The little ceremony was relatively relaxed in our case. It was also helped by the fact that two younger villagers who had previously worked in resorts on Viti Levu (Fiji's main island) served as intermediaries. They are also savvy enough to charge visiting boats 50 Fiji$ as a donation to their school - can't blame them. Our timing turned out to be lucky as we were invited to lunch after the sevusevu. We enjoyed a delicious meal of smoked fish, taro and casava roots, and a very tasty local spinach. After a short game of coconut rugby with the village kids (see picture below) we headed back to Namani and are now eager to explore more of the island and its villages' life. 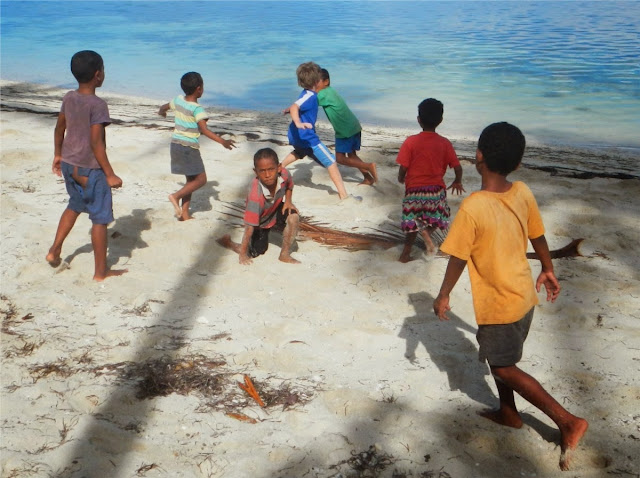 Wow, what a fantastic

Wow, what a fantastic experience! I can't wait to see the pictures. HAPPY BIRTHDAY NADINE!! I am sending best wishes from Canada and hope the coming year is full of happiness and health. Lots of love, Laura, Aiden, Gary and Kona