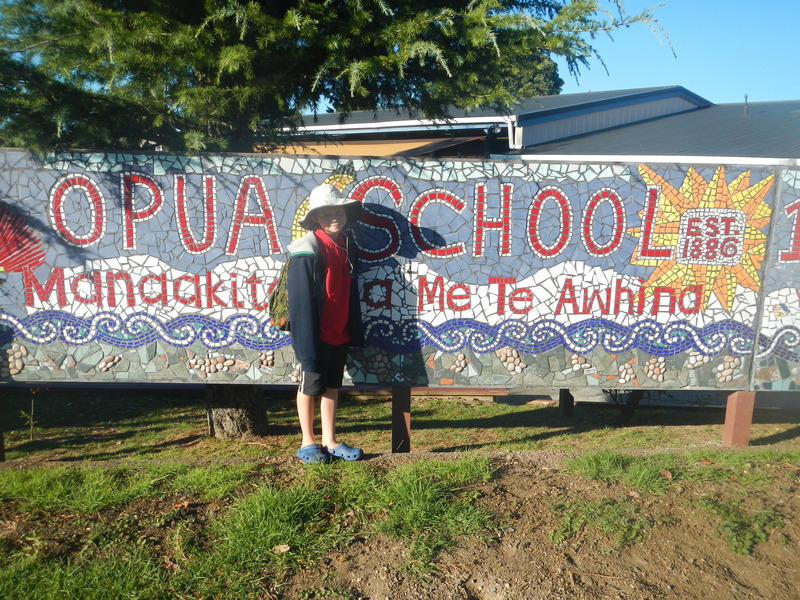 Because I went to Opua School recently, I decided to write an essay comparing it to MIS (Munich International School). I got to go to Opua School because we had to stop sailing in the Bay Of Islands, New Zealand, while we made repairs and got hauled out. I get there by walking up a hill near Burnsco Marine (close to the marina).

There are many differences between Opua School and MIS. One is size: Opua School has about 110 students but MIS has roughly 1500 students. Plus, Opua only has one teacher per class but MIS has two teachers in one class. I like this because it makes the school quieter. There are also fewer classes in Opua School (five classes compared with about 52 for MIS) and no Art, Music, or German classes so I don’t have to move as much. Opua School is in a village, so many kids walk, but at MIS most drive to it because it is surrounded by forest. In addition, Opua School only has one bus, so they almost can’t bus kids in.

Another notable difference between Opua School and MIS is schedule: for example, Opua School has approximately 2 recess hours while MIS has a 1.5 hours total (Great!!! Less school!!!! More play!!!). Opua School has a different way of having free time, too: first we have morning tea (snack) outside instead of inside, then morning tea break, then lunch outside, then lunch break, and after school we play until our parents come (that’s where most of the recess comes from).

Another example is equipment: both schools have computers but Opua School has them in the classroom while MIS has a computer room. For recess, Opua School has a locker for playground equipment to play with while MIS has toys already outside. Plus Opua has better equipment than MIS (soccer balls, unicycles, etc.). MIS has a different mood than Opua School, too - Opua School has a uniform (a red button-shirt with black shorts) but MIS doesn’t. In Opua School, though, you can play video games on the computers - there’s no rule for not playing angry birds (which is soooo much more fun!). I’m glad I came to Opua School because it usually has a more relaxed mood! Opua School does not have any known bullies (MIS has a few) and most kids are locals but MIS stands for Munich INTERNATIONAL School so obviously the kids there are from many countries.

If you count that the two schools are on opposite sides of the planet, it isn’t surprising that there are few similarities. Both MIS kids and Opua School kids speak English so I fit in easily. They both have computers (but MIS has a computer room while Opua School has them in the classroom). Of course, they both have everyday math and a medium amount of homework (although Opua School has less). Each has two separate recesses (where you play outside), a few playgrounds, and a six hour school day (but Opua School has more recess).

Overall, I like home schooling best because I’m alone, school starts anytime, and ends anytime. However, in Opua School I met a lot of new kids, plus it was fun with sports day, two birthdays, bike day, making it very different than home schooling or MIS. The whole reason I went to Opua School was because I had to get off the boat and do something other than home schooling which I think I accomplished. I’m glad I did it!