It Gets You Across: The Panama Canal 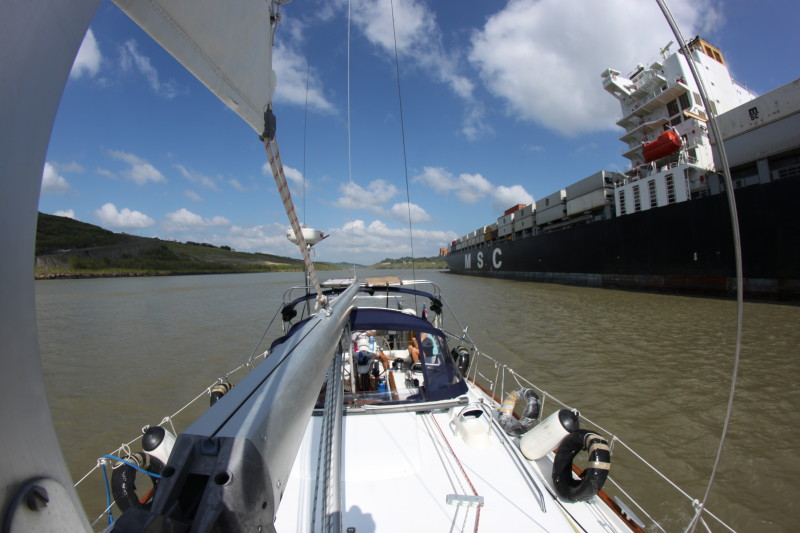 The Panama Canal connects two oceans: the Alantic and Pacific. Big ships cross the the canal constantly because it is much, much less hazardous and shorter than going around Cape Horn. Small ships like our boat Namani do the same for the identical reason. We went through the Panama Canal and found it very interesting. The Panama Canal is impressive for many reasons.

The Panama Canal’s unsuccessful original plan, starting in 1881, was from a Frenchman who planned the Suez Canal, Ferdinand de Lesseps. He planned to build a sea level canal but failed because the company ran out of money, there was too much digging, and he underestimated diseases. The American plan was the same but quickly changed. It lasted for ten years (from 1904 to 1914). But it wasn’t only the plan change that made the Americans successful: it was the killing of the mosquito. Doctor William Gorgas almost eliminated the two deadly mosquito types that spread the diseases so many fewer people died.

The Panama Canal has six sections: Gatun Locks, Gatun Lake, Culebra Cut (now called Gaillard Cut after the architect), Pedro Miguel Locks, Miraflores Lake, and the Miraflores Locks. The locks at Panama Canal are made of concrete and steel and are powered by electricity. When the locks close in front and behind you, water is pumped in or out through 100 holes in the bottom. At Gatun Locks, three locks raise the boat 85 feet (26 meters) above sea level. At the Pedro Miguel and Miraflores Locks, boats are lowered the same height.

There are two lakes in the canal: Miraflores Lake and Gatun Lake. Miraflores Lake is a mini lake between the Pedro Miguel and the Miraflores Locks. Gatun Lake is much bigger and was made by damming the Chagres River. Now, tips of mountains are islands! Gatun Dam is the biggest dam to be made entirely of earth. Gatun Lake’s area is 164 square miles.

We saw many big ships when we went through the canal. The one we were behind in the Gatun Locks was called Clipper Mercury, which was 585 feet long. We also saw its sistership, Nord Bright (yes, Sea Bright’s „little“ sister!). The biggest southbound ship the day we went through was 964 feet long! Some of them were Panamax ships, which essentially just fit through the locks. The new locks are supposed to fit two Panamax ships side by side!

Pilots go on big ships to help the captain. They probably know the controls and limitations of big ships better than advisors, who help small ships (less than 65 feet). But advisors probably know the controls and limitations of small boats more than pilots (by the way „pilots“ here don’t fly planes!). Both pilots and advisors know when to pull lines and where to go.

The tugs at Panama Canal are very boxy and even though they are called „tugs,“ they only push big ships through lakes or cuts. The reason is probably because they can’t steer a big ship very well, plus, when they start their massive engines up, they probably create a lot of wake.

Once in summer camp in Maine, some other kids and I got a tour of a tug. One of the crew said that each tug has 6000 horse power (the Portland car ferry only has 800 horse power). He also said that propellors are not stiff: they are essentiually 90° elbows that have props in them, but those 90° elbows are mounted on swivels. With that, he showed us a 180° turn almost on the spot. The tugs at Panama Canal had one big difference: unlike the one we were on, which had lots of old tires as padding, the ones at Panama Canal had minimal padding, like an oversized rub rail.

Big ships are not only pushed by tugs, but also pulled by the trains. The trains that pull big ships are exactly identical, boxy trains. The trains are called mules because they pull. They are grey metal with an orange plastic box in the front. Each trains is about 3.5 meters long and depending on its size, a ship can need two to eight mules to keep it in the middle of the locks.

It’s not only trains and tugs that allow a big boat to transit, it is also dredgers which deepen the channels. We saw two dredgers. One was totally covered up in equipment and worked like this: there is a drill bit is dragged across the bottom, chucking up all loose material. That loose material is then sucked up and pumped away. The other „dredger“ was simply a crane digging under water.

All the dredgers work in an area made by damming the Chagres River (Rio Chagres). The Chagrees River leads to a dam called Gatun Dam, which is made entirely of earth. Some of the earth in Gatun Dam comes from the enormous amount of dirt dug from the canal. Now Gatun Dam is probably completely overgrown by the thick, dense jungle that surrounds this area.

The Panama Canal is amazing because of the size, how it was made, and all the equipment that helps it function. I think it would be exciting if there was a floating school that would go through it. We went through the canal in two days in January 2012 and it was very interesting and fun.