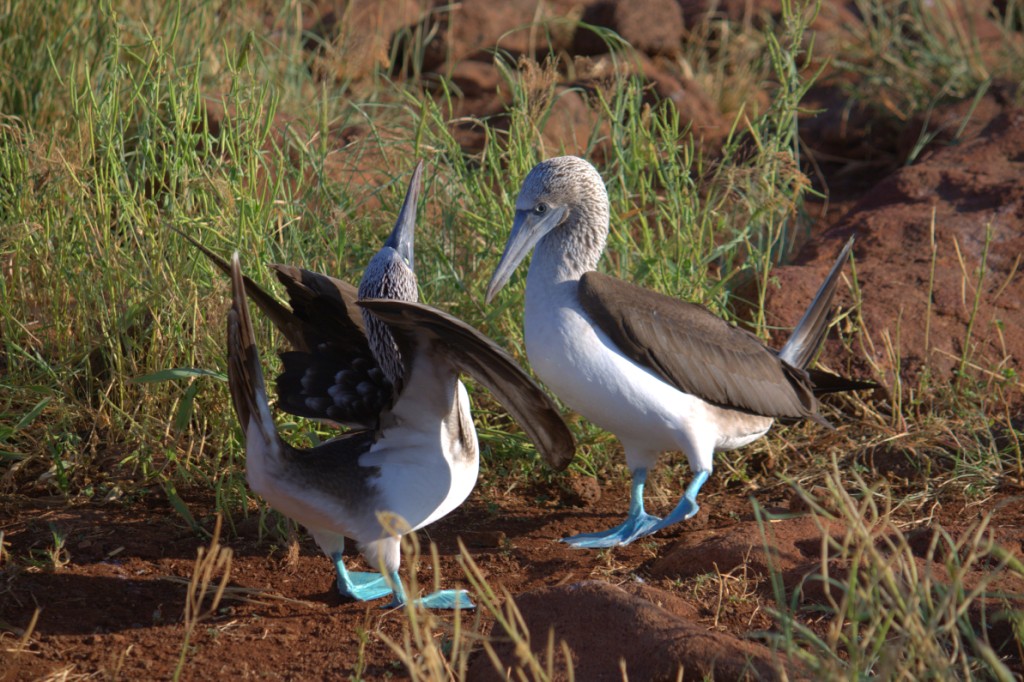 The Galapagos are a volcanic archipelago in the east part of the south Pacific.The four inhabited islands are: Santa Cruz, Cristobal, Floreana, and Isabela, but there are many uninhabited islands where you can find many other animals. The diverse animals in the Galapagos are protected and have evolved to what they are today. Small penguins and lots of big fish live here because the Humboldt Current brings cold, nutritious water from the south.

The person who was most famous for his studies in the Galapagos was Charles Darwin. Charles Darwin was born in 1809. He went on the Engliush ship „Beagle“ with Captain Fitzroy in 1831. He ended his trip five years later. They went around the world and one stop was Galapagos. Darwin was very interested in nature. He was able to go on his long trip because he came from a very rich family. Things that gave Charles his ideas about evolution were finches, fossils, and barnacles. He also wrote a famous book called „The Origin of Species.“ because it changed people’s minds about how animals formed.

Darwin is most famous for studying finches. Finches are small birds that are usually brown and what they eat depends on their habitat. Darwin saw that finches each have a different type of beak. This gave him the idea that maybe they all started off as one species and then slowly evolved to have a more useful beak.

Finches are birds like frigates. Frigates are large, black birds that have a chest pouch that they can blow up to the size of a basketball! In the mating season, the female frigate looks for the male with the biggest red pouch. Because of that, sometimes groups of males team up to make one giant pouch by huddling together and then they all mate with the female. Our tour guide, Omar, once told us an interesting story. One time, one of the males’ pouch popped on a thorny thistle, and tourists were worried the pouch wouldn’t grow back and the mate would never mate. The pouch did heal but it was not as big as it used to be so unfortunately he coulodn’t mate. Frigate birds can not go in the salty sea because their feathers are not water proof. To get food, they pinch fish form the water with their long beaks. If their wings do get salty, frigates have to go to the highlands and clean their wings with fresh water in lakes or else they will die. Frigates are also called „pirate birds“ because they like to steal fish from boobies.

Blue footed boobies are funny brown birds that have blue feet to radiate heat for their eggs. When they mate, the female looks for the male with the darkest blue feet. When the female finds the male with the darkest bllue feet, they dance together by lifting their wings and feet and giving each other twigs. If a boobie had some blue paint, he could paint his feet blue and get the female! The other types of boobies are Red-Footed boobies and Nasca boobies.

Boobies fish like penguins. Galapagos penguins are small, maybe one and a half feet tall. The adults have a white stripe from eye to neck. The rest is black for camoflague on the volcanic rocks. Their bellies are white for camoflague in the water. The younger penguins do not have a stripe. They are ugly brown for camoflague on the rocks. The penguins nest in penguin-sized lava tubes. There used to be 18,000 penguins in the Galapagos but at one point the Humboldt Current stopped and did not bring the fish they needed. So sadly, there are now only 9,000 left.

Penguins also go on land like fur seals. Fur seals are very furry, fluffy, and sleepy. They nearly became extinct because their fur is very long so they were hunted. The hunters sold the fur. Sea lions were not hunted because their fur is much shorter. They live everywhere while the fur seals only live on Santiago. The sea lions are very funny and once I even saw one sheltered under a dune buggy! I also saw them on benches, on streets, and even in a playground. You can not touch the babies, otherwise they will smell „human-like.“ Then their mom will say „Not my baby“ and the baby will be abandoned.

Some of the predators of sea lions are sharks. The types of sharks that live in the Galapagos are the Whitetip Reef Shark, the Backtip Reef Shark, Hammerheads, plus the Galapagos Shark. The Galapagos sharks are small, only four to five feet long. The sharks are not dangerous and you can even swim near them. Another cartilaginous animal we saw are Manta Rays. They leap out of the water and splash back in to get rid of nasty parasites. We saw them from our tour boat, the „Darwin.“

Another aquatic animal is the marine iguana.they are very spiky,camoflauged and shelter under rocks. Their only predator is the galapagos hawk which eats iguana babies. You can mostly see them at low tide because it is easier for small iguanas to eat algae. Their perfect habitat is water,with a shore of rock, and warm sand because they can eat green and brown algae in the water, lay their eggs in the sand, and shelter under the rocks. There are so many of these fearless marine iguanas that you have to be careful not to step on one!

The marine iguanas are similar to sea turtles because both are reptiles. Sea turtles can get very big and around Kicker Rock (Cristobal), we saw three Pacific Green Turtles. They are called this because the old whalers saw that their fat was green. Similar to the sea turtle are land tortoises. The Negree Turtle eats grass and can weigh up to 350 kg and their shell is part of their backbone. They live in the highland ecosystem where it is grassy and rainy but they come down to the low lands because it is easier to dig nests (lumps of sand) there. Now there are thirteen species but there used to be more. Whalers took so many to eat (one boat could take 100 or more) that some species are extinct. Introduced species like goats and dogs can also harm the tortoises. I saw three places where scientists breed tortoises to make the endangered species have more of their type: on Cristobal, on Santa Cruz, and on Isabela. The little ones are cute when they munch on their food. They climb on top of each other and one we even saw on its side!

Some giant tortoises live near the „Gemelos“ (Spanish for „twins“) on Santa Cruz. They are old collapsed lava tubes that make giant pits full of trees. We went on a lava hike and saw the two types of lava that the Galapagos have. They are pahhoehoe (Pa-Hoy-Hoy) and Aa, mabye „ouch ouch“ in English because it is sharp! On the lava grow the pioneer species. Lizards eat the white flowers off the grey mud plant, one of the pioneer species. Other pioneers are moss, lava cactus which has roots that can break rock and the scalacia plant.

We saw many things in the Galapagos but a few things we didn’t find, such as flamingos and flightless cormorants. Flightless cormorants are interesting because they evolved from other birds that could fly. Instead of flying, they swim and fish like penguins. Flamingos are pink because they eat shrimp. Both these bird species only live on Isabela, and we didn’t get to see them because we only had a very short time in Isabela.

All the animals in the Galapagos are amazing because they are so diverse. The Galapagos are a national park so animals are protected and bred in places like the Darwin Research Station. Even though it is far away, it is worth the trip.