Cruising along the Australian East Coast 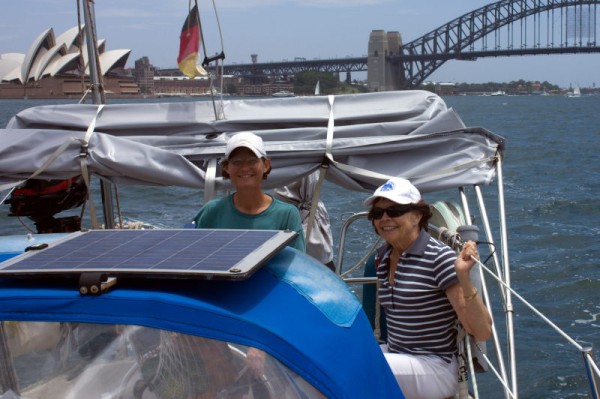 A few posts ago we showed a picture of Nicky during our first visit to Sydney in 2005, when Nicky was 18 months old. During that visit we did a "house swap" vacation with Tony and Julia. The way dates worked out back then it ended up being less of a swap but rather a "sequential mutual hosting". So when we were in Sydney back then, Julia and Tony were very generous hosts to us and we tremendously enjoyed our stay with them.

By now, almost nine years later, we had unfortunately lost all contact information for Julia and Tony (changing addresses and computers a few times between now and then will easily accomplish that). We just remembered their first names and that their house was on the North Shore somewhere on "the other side" of the Harbour Bridge. Nevertheless - because of the fond memories from our first visit - we were very eager to reconnect ever since we got Sydney this time. It took a bit of almost forensic reconstruction of many little memory snippets and poring over harbour charts ("no - their bay didn't look like this one") until we settled onto Woodford Bay as the most likely candidate, very close to our previous anchorage in Lane Cove.

So after we weighed anchor in Lane Cove this morning we decided to poke into Woodford Bay and have a look. We borrowed a mooring from a boat that was leaving for the day (thanks again s/v Raptor) and paddled ashore, close to where we thought Julia's and Tony's house must have been - neither knowing whether our guess work was right, nor if they still lived there (let alone being home at 11am on a Friday). After climbing up from the water to the road we saw a house that looked and "felt" right, so we rang the bell.

What a nice surprise when Tony opened the door and Julia was home as well. Even nicer to see that after nine years their spirit didn't seem to have changed a bit - Julia hopped onto Namani to join us for the sail to Rose Bay (photo above) where Tony picked her up by car a few hours later. We'll count ourselves very lucky if we manage to stay as spontaneous and energetic as they have.

We're now looking at Monday (06JAN) for a possible departure towards Brisbane. We'd love to stay in Sydney but it's time to move north again. We console ourselves that we'll likely have another chance to visit in a few months and that good-byes now are hopefully only for a short time.