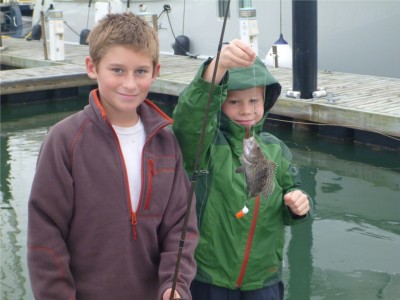 For the past weeks we have been glued to the weather report, first observing patterns and now planning our departure from the US to the Caribbean. Hopefully, there's a window opening soon and we hope to jump through it. Here is a synopsis of our position (figuratively): we want to get to Panama as quickly as possible, making short pit stops only as necessary in the Bahamas and Jamaica. And we have to get to Panama soon in order to enjoy the San Blas islands and other Panama highlights without rushing straight through the canal. The thing is, if we don't get to Panama by Christmas, we probably won't be able to make it until April, because between late December and late March the so-called Christmas winds (very strong winds) kick in and make a crossing of the central Caribbean inadvisable.

So we want to get to Panama ASAP - but there are several hurdles in the way. We're still in North America where the approaching winter blows strong low pressure systems off the continent and into the Atlantic in quick succession. Further south, in the Caribbean, it is only just past the end of hurricane season, and a few late storms are always possible, so we need to carefully squeeze between the lows and the potential tropical storms. Finally, there's the Gulf Stream to cross, which is our most immediate obsession. The trick is to cross the very fast north-moving current (it's about 100 miles across in these latitudes, and move at 2-3 knots) at a time when the wind is not blowing from the north - because the south-bound wind hammers into north-bound water and creates terrible seas. In short, we need a time frame that provides (a) no stormy lows hanging over our heads, (b) no tropical storms in the way, and (c) no northerly winds for at least a day.

The good news is that we think we finally have a good window coming up, with light winds that should allow us to get across the Gulf Stream and at least as far as the Bahamas. It looks like we can leave tomorrow. Fingers crossed and stay tuned!

To catch up a little from our last entry: we motored down the ICW (the Intracoastal Waterway, a series of rivers and canals that go inland to avoid Cape Hatteras (âthe Graveyard of the Atlantic" - enough said?) to Beaufort, North Carolina. There, we waited out stormy offshore weather. Lucky for us, there was another sailing family nearby and the kids (not to mention the parents) really hit it off. 11 year old Henry took Nicky fishing while eight year old Anna played games with him and Nicky was busy and happy all day. He even got to do a sleepover on their boat!

Our friend Bill flew in from Washington to help us sail to Jamaica - only to fly out again the next day when it was clear the weather wouldn't allow a passage for at least a week. Poor Bill! He will come back to do another open water passage with us as possible - the sooner, the better! We three left Beaufort on Tuesday and came south over a rolling, uncomfortable 36 hours to beautiful Charlestown, South Carolina by today, Thursday, to get a small head start to our planned Gulf Stream crossing point. Tonight a cold front will pass through with unsettled weather and the plan is to leave behind it tomorrow with favorable conditions for a few days at least. We have been in contact with Jeff on Boundless who is headed to the Bahamas and it will be great to have someone to report our position to and exchange information with (via SSB radio) along the way. He does the trip every year and knows it well so it's great to hear his advice.

To summarize, the themes of the week are friends you can count on, and weather you can't!