Pictures in the Sand

Posted by Namani on Saturday, 7 September 2013 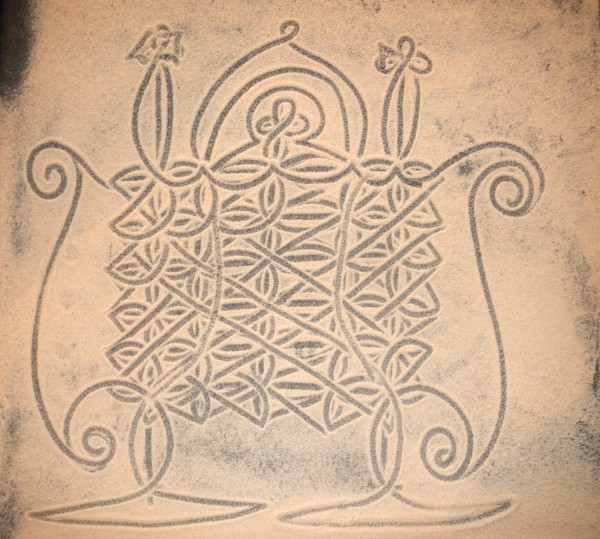 We visited Vanuatu's National Museum here in Port Vila today. It's small but definitely one of the more interesting and more captivating museums. Edgar, the (amongst many other things) museum guide there has a special gift to interact with visitors and bring the exhibits there to life for them - in some cases literally as he he masterfully plays the musical instruments on display (he was actually invited to the 2012 London Olympics to give a demonstration there).

Aside from the musical instruments sand drawings make up a big portion of the museum tour. These drawings are a trademark of the central islands in Vanuatu (incl. Edgar's native Ambrym). They're very complex complex shapes, made up of a single continuous line, drawn with a finger into the sand. There seems to be a canonized set of shapes, each relating to a specific "story" in the islands' oral tradition. The drawings serve an important part in preserving these oral traditions. Even though the drawing itself will disappear quickly in the wind, children learn about the traditions by learning the drawings. I guess it also helps to prevent "story-creep" and thus preserves the traditions in their original form and content.

Another use of a simpler form of the drawings is simply to leave a message for someone else. The drawing below means "I'll be back" and you may find it you had been invited to someone's house for a certain time but your host had to run some errand and couldn't be there to greet you. 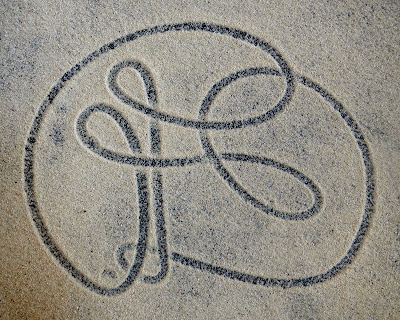 Even though we could only visit the southern islands of Vanautu we continue to be fascinated by the people and the culture. An impression that for us perhaps very pointedly captured this fascination was from today's national newspaper here in Port Vila. On any given day the paper here seems to have significantly more coverage of international news than the New Zealand Herald, New Zealand's biggest national paper (which we had seen on some days without any international news outside the sports section...). At the same time the Vanuatu paper features an article on page 3 that reports accusations of sorcery against a team in a national track competition - reported in typical fact-of-the-matter newspaper style (members of other teams had reported sudden fatigue and stomach aches). And back home they worry about doping...

Language continues to be another fascinating aspect (see previous post about Bislama). At about 1000km Vanuatu has about the same north south extension as Germany but - being made up od small islands - only 1/30 of Germany's land area. Back home we still have to listen very carefully to understand our Bavarian neighbors when they "go native" - in a country that is one cohesive land mass. So it's not quite surprising that in the scattered islands of Vanuatu - without the seafaring heritage of the Polynesians - over 100 distinctly different local "village languages" exist. Apparently it was only in the 19th century when European colonizers shipped off large numbers of ni-Van for slave labor in New Caledonian mines and Fijian sugar cane fields that the need for a common language developed which eventually became Bislama. As consequence of this history, many ni-Van today will speak at least four languages: Their native village language, Bislama, plus the French and English they learn in school.

Based on the current weather forecast it looks as may leave on Tuesday afternoon for New Caledonia (today is Saturday). That will likely mean splitting paths with Victoria's crew who will continue further north and bypass New Caledonia on their way to Australia. We hope to see them again in Brisbane early next year. In the meantime we'll look forward to Bafia's visiting us in New Caledonia.