Living It Up in the Hotel California (aka New Zealand) 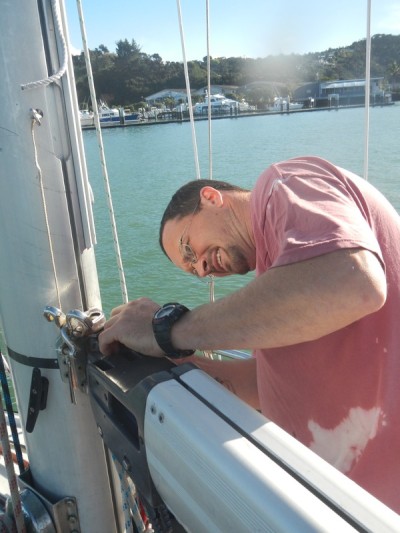 You can check out any time you want, but you can never leave...
That's kind of the feeling we have right now. Lovely as New Zealand is, we thought we'd be in Fiji by now. Admittedly, this is our own fault, since we keep waiting for a better weather window - and waiting, and waiting. On the other hand, we are pretty content here for the time being and see no reason to take an unnecessary thrashing at sea.

What we need is a low pressure system followed by a good strong high to give us good winds up and out of these latitudes. From a distance, they all look good while they build over Australia in the long-term forecast. But as the time and the systems inch closer, they inevitably morph just enough to keep us here in the Hotel California (er, New Zealand, aka Middle Earth), at least for the time being. Last Saturday we were all set to leave. The boat was ready, the crew was ready, even the vegetables were ready! But what was a dodgy weather window to begin with took a turn for the worse in the last pre-departure weather forecats. If we left as planned, we would most likely run into strong head winds, then - earlier as expected - a broad zone of light and variable (= non-sailable) wind, followed by more head winds again (as opposed to earlier forecasts, which had head winds, a smaller zone of no wind, and then more favorable winds). Not exactly a great recipe for a decent passage. Yes, we could do it, but why? We'd rather wait for a better outlook and do all three of us a favor.

So, another week at least of the Bay of Islands. Not exactly a punishment! We found some small rig issues that we need to address at some point in the next six month, so we'll take care of them right away. Each of us also has his or her own personal project to pursue, which also makes us patient. The one catch is having to extend our visas, which we will tackle on Monday.

Until the next "last" report from New Zealand, ciao!