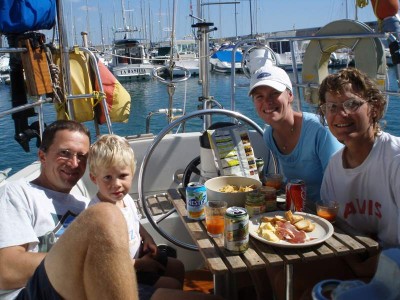 To recap a little, the passage from Gibraltar to Lanzarote was 650 miles in 6 days. As soon as we reached the more open water of the Atlantic there was a difference - a much larger, but also longer swell than anything we had ever had in the Mediterranean. It took a few days to get used to the larger waves but the fact that they were widely spaced made them easier to handle.

Life was also made much easier by the last minute arrival of our friend Laura all the way from Alberta, Canada. She joined Namani on this passage and made life infinitely easier by keeping Nicky busy and lending a hand with anything and everything, from reefing sails to cooking dinner. It made a huge difference to us as we then arrived in Lanzarote a bit tired but not exhausted. What a pleasure it was to be able to share such an experience with a good friend. It is nice sailing as a family but also nice to connect with our friends from far away.

During the uneventful passage (a good thing), we exchanged daily position reports over the radio so that the entire Rally fleet knew where each boat was. This is an excellent safety measure and also a form of entertainment, guessing which boats might be furthest ahead ... and which were bringing up the rear along with us! Two highlights of the passage for me were having a pod of Atlantic Spotted Dolphins join us for a while and catching a good sized dorado fish, which made a tasty lunch.

We arrived in Lanzarote and are now mid way through a two week stay. We rented a car and visited Timanfaya National Park where we enjoyed a lurching camel ride through the volcanic landscape. Yes, it was a rental car, so we could bump unconcerned down the dirt track to Papagayo beach, one of the most beautiful I have seen on this trip. We also visited the stunning house/museum of Lanzarote artist Cesar Manrique, built above and into a series of lava bubbles. The Rally has organized some interesting events for us like a presentation on whales and dolphins (there is a study center and museum here for Cetaceans) and next week the Rally will host a dinner for us at a fancy restaurant in a hollow lava tube. We are looking forward to that!

Naturally there is also work to do but we are making good progress on a few more projects. I wanted to write "the last few projects" but it seems there never is a "last" project on a boat! The list remains a constant length though the jobs on it change. I realized that though we feel quite busy all the time it is probably the way retired people are busy - a nice way to live, making your own schedule and pursuing your own projects. We are appreciating our luck to be doing that.

Nicky is enjoying time with his buddies Beth and Holly and we have hope that Arearea will arrive in Lanzarote before we depart on about the 16th. Laura has already left for Canada and soon Peter will arrive to join us for the Atlantic crossing. Meanwhile we have to figure out exactly which provisions we need for 3 weeks and where to stow them, together with 200 liters of extra water!

It is really nice for us to hear from people who follow our blog so thank you for the comments and emails. We will write again before we leave Lanzarote and hopefully we will be able to post brief updates while at sea.