High and Dry in Opua 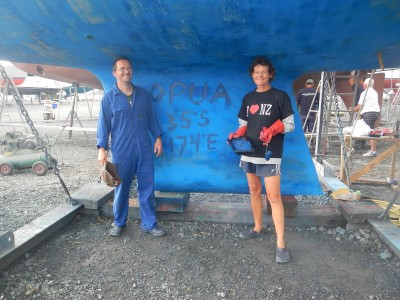 So why isn't Nicky in the picture, you ask? While Markus and Nana work on the boat, Nicky is attending nearby Opua Primary School for a week. It seems a very friendly and accommodating place - as evidenced by the fact that they accept short-term guests! Nicky has been enjoying it so far and has good timing - sports day is coming up soon! He mentioned two noticeable differences to school back at MIS: first, he says it's more relaxed in terms of the daily schedule (with more recess time, he happily reports), and second, it's a very small school of about 60 students.

Meanwhile, other than painting, Markus has also replaced the cutless bearing and shaft seal while I have been doing a lot of writing. We are scheduled to splash on Monday April 8th and will stick around Opua until the end of the week for school, then hopefully head out for another quiet week or two in the Bay of Islands. After that, it will be time to make the last preparations to depart NZ for Fiji (which will be the end of April or early May). Change is in the air here in Opua: the temperature has been dropping with the onset of fall, and cruising boats are slowly gathering here, preparing for a mass exodus north to "the islands" (as they collectively call Tonga, Fiji, and other northern neighbors). Hard to believe that our season in NZ is almost over!