Posted by Namani on Wednesday, 26 February 2014 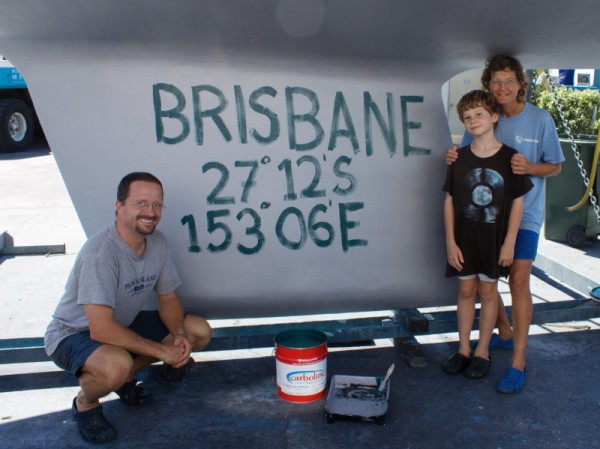 Namani is getting a few new coats of antifouling - a good opportunity for another shot in our "On the hard" series.

You may ask yourself though what's wrong with the most recent picture? The Namanis wearing their best t-shirts and shorts while doing antifouling?

Well, we sold Namani a day earlier and the new owner had commissioned a painter to do the antifouling - so we were just guests in that picture. Janet - the new owner - had come to look at the boat a week earlier. We went for a little sail in the bay together, and after the surveyor gave Namani a thumbs up yesterday we had a deal. Under the agreement, we will be able to live aboard Namani for another two months and will deliver the boat to Cairns by the end of April (about 900nm north of here).

A small step for mankind (not that they'll notice...), a big step for us. It's always been the plan to sell Namani at the end of this trip. Even though parting with her won't be easy, it feels like a natural conclusion to our 3-year "project" (or 8-year project if you count our first "seabbatical" in 2007/2008). She's been a fantastic boat for us and now she'll have someone else to look after. Meanwhile we'll look forward to a new chapter, starting in August back in Germany. Until then, we'll fly to Tasmania to meet with Nana's mother for a short vacation, make a good-bye stop in Sydney, and then have our good-bye sail up to Cairns. From there, we plan to hop, skip, and jump back to the fatherland with a few stops in between to visit friends along the way.