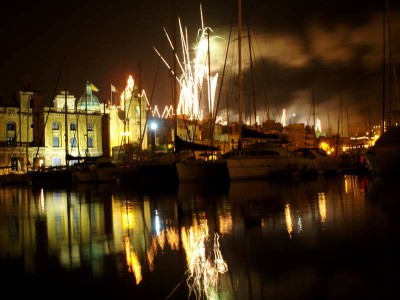 Hooray, we are in Malta! It was an interesting week getting here ...

First of all, we had a nice couple of weeks in Greece with a good but condensed sampler of Ionian and Aegean islands. We regretfully left out our planned stop on Santorini after hearing repeated warnings from other sailors to avoid the island at all costs - unsafe anchorages, lava dust clogging all intake systems, etc. So we decided to spend time instead on less visited islands and enjoyed Kithnos, Serifos, Sifnos and Kimolos a great deal. Someday we will just have to do a regular vacation to Crete and Santorini I suppose!

We left Milos on August 17th after waiting out winds too strong and seas too big for our taste. The first afternoon sailing southwest was fine with fairly big seas but manageable winds, and by dawn of the first full day at sea we were in sight of Kithera, the island that marks the boundary between the Aegean and Ionian seas. Unfortunately, we were to spend that entire day in sight of Kithera as a W or NW wind wouldn't allow us much progress toward Malta (due west); instead we made long tacks only a few degrees west of north or south. Hard to imagine that sailors in the golden age of sail could spend weeks tacking against the wind! Misery!

The second full day at sea was the same: frustrating long tacks with little progress. We did make the important discovery that our smaller staysail allowed much more comfortable motion than the genoa in those conditions, though. Happily, the wind shifted that night and we enjoyed a great run directly toward our goal. The fourth full day was the same; on the fifth, the seas were uncomfortably rolly but we still made good progress toward Malta. On the last evening, we heard a gale warning over VHF which was a bit frightening. We do feel that our boat is well prepared to handle a gale but naturally we would rather spare ourselves the experience, for now anyway! So we made all speed possible through the night and at 3AM saw the lights of Malta. We entered Grand Harbour before 9AM and were greatly relieved to have avoided gale force winds.

Nicky was a real star throughout the passage: he kept himself occupied very well and wasn't frightened by heavy seas or high winds. At one point we were knocked fairly loudly by one wave and something crashed in the cabin, but he nonchalantly explained that "it's just a big giant wave" and went back to his Lego. We found the experience a good learning one for trying out the staysail in different conditions and managing our time: for example, trading off a little speed for making the boat sail comfortably so that the off watch person could sleep more soundly and the on watch person wasn't too tired by the time they were done. It was a bit tiring to do 3 hour watches through 6 nights in a row; having 3 adults to do the watches would make things a lot more relaxing. You do quickly notice the difference between a 2 or 3 day passage and a 5 or 6 day passage, that's for sure! It was also a valuable experience to measure our water use: we were fairly careful with our freshwater (about 300l total) and used less than half by the end of this passage. No, there wasn't a lot of singing in the shower going on!

Dolphins saw us off from Greece of Kithera and dolphins greeted us briefly off Valletta. All fishing attempts along the way failed, but at least we avoided the fishing nets this time. Once in Valletta we were quickly greeted by my mother who was eagerly monitoring customs for our arrival, and we treated ourselves to 4 quiet nights in Grand Harbour Marina to start with (still, I kept waking up in the night as if I still had to do a watch). Now we are in Kalkara, tied up at a boat yard where we will do some work on the boat, including putting steps up the mast and installing a track for our new storm trysail. This work should keep us near Valletta for another 4 days and then we can hopefully head on to Gozo for a short stay before heading further west. That means our planned 6 days in Malta will turn into 2 weeks - fine with me! Valletta and the three cities are amazing, bristling with fortifications and living history. The festival of St Dominik made Vittoriosa a lively place over three days, with parades, fireworks, and cannon fire at all times of day and night. The saint (at least his statue) looked on quietly observing the celebrations in his honor.

At home, a new school year is starting and I feel very lucky to be taking time off to make a dream come true on Namani. Of course, reality is always different than a dream and it hasn't been "another shitty day in paradise" kind of living. Something on the boat always needs fixing, and it is hard to get a solid night's sleep whether at anchor or in a marina with the movement / anchor checks / wind shifts / noisy neighbors. There's no kindergarten to occupy your beloved offspring. Living aboard, you can't always wait for fair weather - you must put up with conditions you might not choose to sail in as you would normally. At a few moments I even almost thought wistfully of normal life at home, with predictable hours of work and time off, unlimited running water, a bed that doesn't roll at night... but no, it is fantastic to be living this as a reality and not as a dream and I feel very lucky to be doing it. It is also an unusual chance to really take on a big project with Markus and Nicky, a project we all live and work at together for 24 hours a day, enduring some difficult moments, and soaking up the good ones. Right now, the sun is setting over Valletta, so it is time to go soak ... til our next entry!