Getting Ready to Leave 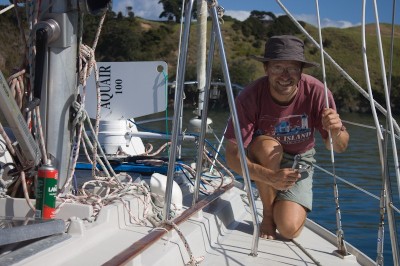 After our return from Auckland we headed out to Urupukapuka Bay on Friday (26APR). This is perhaps our favorite spot in the Bay of Islands and the weather cooperated to provide a beautiful setting there again. Our friends from Victoria had just dropped their hook a few hours ahead of us and we were happy to see them again.

This was also our chance to finish all those unplanned boat projects that had sneaked onto our to do-list over the past weeks. We finally re-bedded the rub-rail (after having it ferried around the Bay of Islands on deck for a few days). After our re-provisioning spree during our trip to Auckland we thought we might have bought too much sealant and epoxy. Not a worry anymore, we're back to very reasonable levels now...

While working on the rub rail we also discovered a bit of a nasty surprise: When we had sections of the balsa core in Namani's deck replaced in 2011, two small (~3cm in diameter) circles had been cut out on the port side of the deck to inspect the balsa core there. Apparently the core had looked OK and those circular plugs were epoxied back in - unfortunately in a very haphazardly fashion. So the plugs eventually dislocated slightly and broke the paint surface which seems to have been the only seal against water/moisture ingress in those spots. Consequently, water had found its way into the deck in these places and rendered the balsa core soaked and useless.

Luckily the weather cooperated with a spell of dry and sunny days. Thus we could cut out two approximatley 50cm x 30cm section of the deck, remove the wet balsa, dry everything, fill the void with epoxy, wood and foam, puzzle the deck pieces back in place, sand and fair the whole thing over, and finally paint it. Victoria's heat gun proved to be the secret weapon in this endeavor since it allowed us to dry out everything and complete the work in three days. That left us enough time to enjoy a few last fabulously beautiful days off Urupukapuka and Moturua before heading back into Opua.

We're now at a mooring here off the marina and currently expect to head off to "the islands" (i.e. Fiji in our case) next Tuesday, after a nasty looking depression has moved off. We've checked and re-tuned the rigging yesterday off Moturua and now (hiopefully) have only a few odd bits and pieces left on the to do the list before heading out.