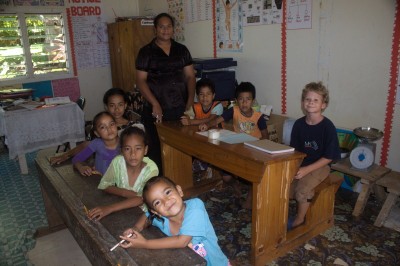 After 3 very nice days at Kenutu Island on the eastern edge of Tonga's Vava'u Group, we sailed back west to anchor off Lape Island yesterday and explore the coral gardens here by snorkeling yesterday afternoon (absolutely beautiful!). Nicky is off for a day at the local school here on the island this morning, thereby increasing their student count by more than 10% (usually 9 kids). We'll report when he gets back in a few hours. Earlier this morning I met Moe and Margaret on Wadda, who were anchored just across the bay here - a real pleasure. Moe is one of the two heads behind "Navigatrix", a very lightweight and robust Linux distribution for cruisers (something for another post - see www.navigatrix.net of the October issue of Blue Water Sailing magazine). We have been using Navigatrix on Namani for some time now, only knowing the people behind it from some email exchanges and never being aware that we were actually sailing in the same waters - a small world again... (Wadda is off to Australia via New Caledonia later today though).

This afternoon we plan to go back to the "buzzing metropolis" of Neiafu to do some provisioning and check out of the Vava'u Group before heading south to Tonga's Ha'pai island group.

Now to the title of this post - "The cruiser's Ponzi scheme"... some years ago Germany was haunted by the "Hermann" craze. Hermann was a sourdough-based cake and every time you baked one you ended up with enough sourdough to make another one AND pass some dough on to at least two friends as a sourdough-starter, together with the recipe. Following the laws of exponential growth, this action would soon come back to haunt you as rapidly multiplying numbers of Hermann-bakers were looking for victims to pass on their surplus sourdough to (as a matter of honor you would never throw it away or let the culture die). It came to the point where the entire population of Germany was becoming seriously malnutritient (because all you ate were Hermann-cakes) and you were avoiding your friends on the street for fear they might desperately try to pass on some more dough to you. Luckily, something happened at that point that took peoples' mind off Hermann for long enough for the craze to die (can't remember what it was - we probably lost some World-Cup final).

We may now have stumbled into a similar Ponzi scheme in the cruising community - cheese culture. Ever since leaving Panama, cheese has been very hard to come by and/or prohibitively expensive. Hence, we were delighted when we received some "MÃ¨re" (French for mother) from friends on another boat. It's fabulous - you add "la mÃ¨re" to whole milk, wait for 36 hours, then drain the liquid through a kitchen towel, and voila - a very tasty cheese emerges (in German you would call it "FrischkÃ¤se", the English seem to call it "Farmers' Cheese"). Add some onion, garlic, salt and pepper and you have something so addictive that it would probably be considered a controlled substance in the US (in addition to being hazardous/flamable, depending on the garlic content). The liquid you drained to get the cheese then becomes "la mÃ¨re" for the next batch of cheese. Here's the catch: Everytime you make cheese you end up with MORE mÃ¨re than you had before. Cruisers are good at sharing - so you pass it on to friends on other boats. It just dawned on us that we may have set in motion the aquatic equivalent of Germany's Hermann epidemic. The propagation speed will be a bit slower given the lower density of the population, but exponential growth remains exponential growth.... Who knows - we soon might see boats taking vast detours to their destinations and maybe even deliberately sail into cyclone territory just to escape "La MÃ¨re"... We hope that temperatures outside of the tropics will be too low for "La MÃ¨re" and thus the epidemic will be kept under control. Stay tuned...