The "coolest and scariest thing"...

Anchored in Port Resolution, off the island of Tanna 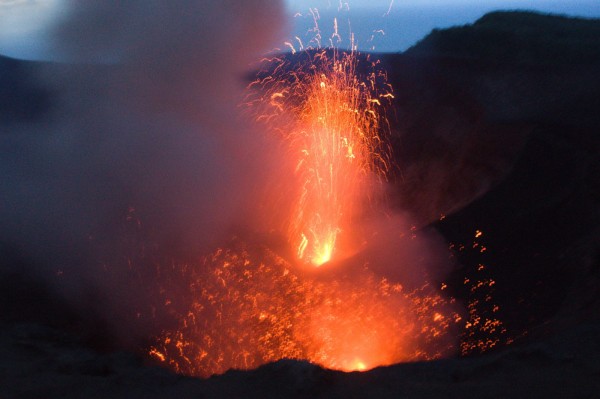 Over past 24 hours we had a wealth of impressions and experiences - it almost feels that we have to go on stand-by for a few hours to avoid sensory overload...

We sailed from Aneityum to Tanna on Sunday (25AUG) and with an early start and good wind we made the 45nm in less than 8 hours. The most well known "attraction" of Tanna is probably Mt. Yassur, an active volcano, that has been on a continous "slow boil" for the past 300 years. Heike from Victoria (they got here a day earlier) had already organized a car and driver and so together with the Victorias and the Radiances we went to visit the volcano yesterday afternoon.

The scene would simply be impossible in the western world: The car drops you at the foot of the volcano (inside of something like a national park) and you walk up to the rim. From there you look down into the crater and then up as it spews out red-hot magma at about one-minute intervals. The ground beneath your feet trembles and the sound from the eruptions thunders around you. No signs, no fences, no guards. We got there just around sunset and for all of us it was probably the most awesome and most frightening experience we've ever had. Or -as Nicky excitedly put it- "this is the coolest and scariest thing!"

There is some regulation regarding access to the park and if the volcano's activity goes above a certain threshold you can't enter it. Nevertheless, at each of these "mini-eruptions" (they didn't look "mini" to us!) your first reaction is wanting to turn away and run while the sheer fascination at the spectacle and the awesome power keeps your feet in their place.

On the way to the volcano we had stopped at the "John Frum" village, the most prominent of a set of villages that practice what seems like a quirky "religion". Apparently a few years before WWII a white man named John Frum appeared on Tanna out of nowhere (shipwrecked?). The local people saw him as some kind of a divine spirit (an interpretation hat was perhaps aided by prior kava consumption...). When he promised that the ni-Van (local people) would obtain wealth if they got rid of the Europeans (presumably missionaries and the joint British-French colonial condomenium government). The ni-Van took his advice and while they didn't end colonial rule just then they revived some of the old pagan traditions which the missionaries had previously banned. A few years later in 1942 US troops arrived in Vanuatu, using it as a base in the SW Pacific. The equipment and goodies that arrived in their wake apparently looked like the fulfilling of John Frum's promise of wealth (apparently by then he had disappeared somewhere in the process).

The end result were two partially related and overlapping "cults": One practiced on the island of Tanna by the followers of John Frum who conduct some kind of a ceremony/service every Friday while awaiting his return. The other is referred to as a "cargo cult" on a number of the Vanuatu islands. After the end of WWII and the withdrawal of the US troops some ni-Van built mock air strips complete with torches as runway lights and "radio" control towers in the hope that - if they act like the US soldiers - cargo will come their way again, together with associated riches.

While we love the story it gives a bit of a false impression of the ni-Van. The people we have met on Vanuatu so far have mostly impressed us with their smarts and principled believes that seek to keep some of the old ways alive in the face of the inevitable arrival of modern influences and gadgets (on Aneityum an afternoon of traditional dancing and singing with kids playing around beach fires was followed by all the kids crowding around a generator powered laptop to watch some action movie).

This morning then we had an early start to follow an invitation to attend the circumcision ceremony for a local 12-year old boy (the circumcision itself had already been performed a few days ago and the lad seemed in good spririts again). In what seems to be a rite of passage and the boy's admission into the village's "circle of men", there is lots of costume dancing and singing and the bringing of presents for the boy's family (including two pigs who were killed on the spot as part of the ceremony).

After a quick stop back on the boat to bake some bread (including a visit from a local father and son who borrowed some tools) we then went ashore again for a pig-roast on the beach which Nelson's family had prepared for the boaties currently in the bay. For them it's a good way to generate income for the steep school fees for their children. For us it was a delicious meal in a beautiful setting with some very interesting conversations with Nelson and his family. Most families in Vanuatu live free of the land and all local trade seems to be based on bartering. They do however need to generate a substantial amount of cash with school fees being around the equivalent of EUR 500 per year and child. Hence there is quite some entrepreneurial spirit and people will offer you services for money. This is however never pushy or accompanied by any of the bargaining that leaves you with the feeling of getting the short end of the stick.

Another thing that struck us is that there seem to be no middle men. It is the family who offers to prepare the pig roast that approaches you and the same was true on other occasions (it can get a bit confusing for a new arrival who hasn't learned to tell the families apart yet...). On Aneityum's Mystery Island even the cruise ships seem to deal directly with the families in the village on the main island (who seem to be very smart about managing that relationship). So far it seems to be one of the few examples where a healthy degree of tourism benefits everyone. For the cruise ship passengers it's a day in paradise on Mystery Island, for the "yachties" it provides unique experiences and interactions in a stunning setting, and for the ni-Van it brings in cash for schools and hospitals as well as some skills and spares that help to repair broken equipment.

So we'll be going to reclaim our tools this afternoon in an exchange for fresh fruit and vegetables - currently the most precious currency for us, together with fresh water ;-)