Posted by Namani on Thursday, 5 September 2013 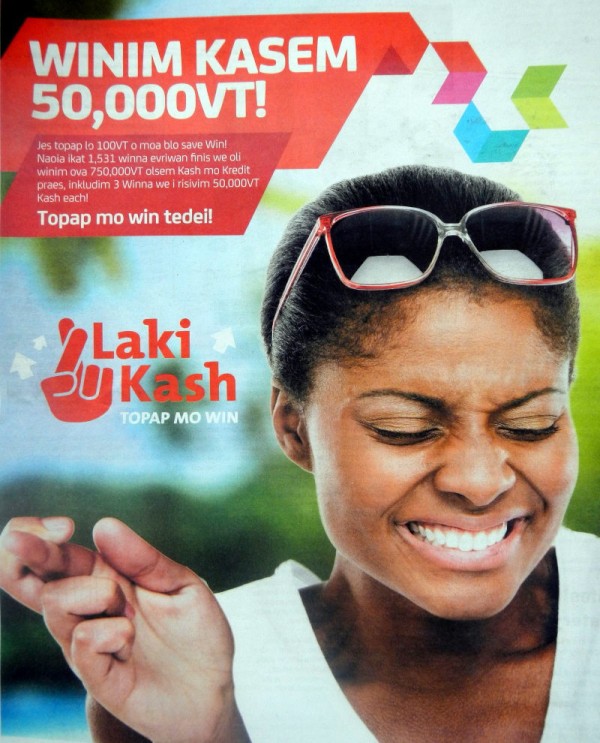 We are on a mooring in Port Vila, Vanuatu's capital on the island of Efate. Funny to see all those artifacts of modern life again, mixed with some of the more traditional aspects we have seen on the smaller islands on the way here.

Bislama is one of the three official languages in Vanuatu, next to English and French. It is a form of Pidgin English and sounds like a totally legitimate language when you here it spoken between local folks. When you just pick out individual phrases it can become pretty funny though (I guess in the same way that you can make fun of German by picking the right phrases with the right intonation...).

We went into a Digicel store yesterday, to buy a SIM card for internet access (Digicel is one of two cell providers in Vanuatu, the other being Telecom Vanutu). Looks like any cell phone store with the latest Samsung or whatever tablets on display and some young hip kids as sales staff. Behind the counter two big video screens run a slide show with special offers - in Bislama: You can change to a new rate plan with "unlimited tok tok" so you don't need to "topap" when calling your "frens". By signing up you also participate in a raffle and might win some "laki kash". Brilliant, isn't it?

The grammar is wonderfully simple (no conjugations, no declinations). The vocabulary seems to be built from relatively simple "atomic" words that can be combined for new meanings. One of the key and most versatile glue words is "blong", derived from the English "belong" and used like a combination of the English "of" and "for". "My name is..." becomes "Nem blong me...", a seagull is a "pigeon blong solwater" (solwater = sea-/saltwater), and a helicopter is a "mixmaster blong Jesus Christ". Now that's a creative language!

The overnight passage here from Eromango was pretty uneventful except for a choppy and bouncy swell that seems to be the norm in these waters even in winds below 20 knots. We were surprised that we could actually see the glow of Port Vila from a 50nm distance during the night. When we sailed up the US East Coast a few years ago past New York City, we were similarly surprised not to see any glow during a similarly clear night from about the same distance. Given that the city lights here are more like big village lights and neither more powerful nor more numerous than the ones in NYC that seems to only leave different degree of air pollution as an explanation...

Before leaving Eromango we had a nice morning ashore, meeting Donald and his family. Once again we were puzzled by the combination of people being relatively cash rich (in Eromango they sell lobster and hand crafts to buyers on Efate) but apparently having little to no local use for the money (as mentioned in a previous post secondary school becomes an expensive item if you want to send your kids there). We're not even beginning to understand the different wealth levels of different families and the (power-) relationships between families on these islands. It would probably take more than a full season and some fluency in Bislama to get a glimpse of that...

By the way - did you figure out what the English word for the Bislama title of this post is (nothing to do with the content of this post, just another little Bislama jewel)?